Some say that “The Montgomery” is the oldest existing building in Gillette. Dating back to 1911, visitors flock to 100 South Gillette Avenue just to see it. It is fair to say that this café and bar has seen a lot in its colorful history. For example, rumor has it that the establishment once hid a brothel in the basement when an owner transformed it into a hotel and bar. It is said that this same owner eventually ran and won the mayoral race. (By the way, there is reason to believe that he practiced law but without a license or any legal training.)  What does this scintillating history have to do with SignBoss and our ability to perform historical illuminated sign repair in Gillette, WY? 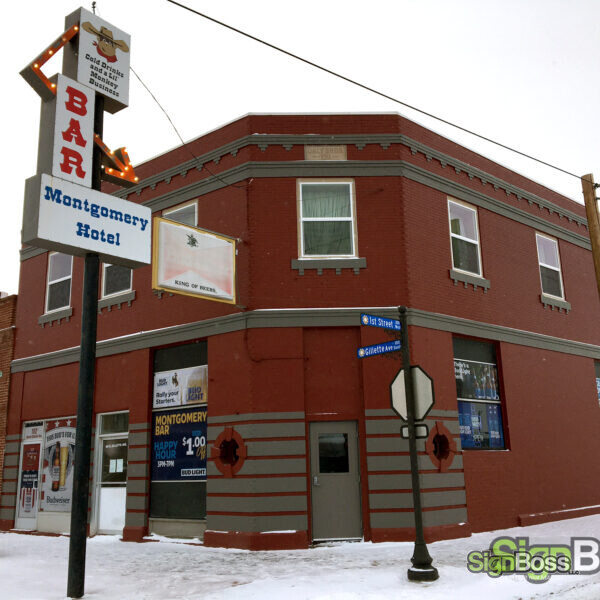 Consider that the current establishment has been in business for about four decades. In the process, it changed hands numerous times. Eventually, The Montgomery developed a reputation as a local favorite and dive bar. Even then, its storied history made it a must-see for travelers and tourists.

Not surprisingly, the current owner wants to maintain as much of the venue’s historical luster as possible. When there were problems with the street corner pole sign, the management team did not want to buy a new sign. Instead, they tried to maintain the atmosphere with a careful sign repair. Could SignBoss help? Of course, we could!

Maintenance Was a Must-Do

When our specialists went out to the site, they quickly noticed that the sign components had not been in full working order for a few years. Anyone else might have drawn up a proposal for a full sign refurbishing or replacement, but our shop was excited at the chance to be part of history. The actual work itself had to be careful, meticulous, and highly detailed.

Internal parts replacement. Some of the ballasts and light sockets inside the sign had gone bad. Since these elements were beyond repair, we replaced them.

Partial LED retrofitting. The sign’s original illumination is part of its appeal. However, it was impossible to find bulbs for the arrow. As a result, we retrofitted this portion of the sign only to allow for LED technology. Now, the arrow works once again.

Gentle maintenance. Due to the sign’s historical value, our team was careful to treat each part with great care and respect. We gently cleaned the interior and the other elements.

For years, the sign had not worked. Now, Gillette once again has a working, iconic landmark in its downtown location. Whereas the sign stands proud at the bottom of Gillette Avenue, it can now be seen from the top of the hill at the opposite end of the downtown strip!

Of course, historical illuminated sign repair in Gillette, WY, is not the only thing we do. During our sign shop’s tenure, we have completed brand-new installations of storefront building signs, pole signs, channel lettering, and so much more. Besides that, we have repaired, refurbished, and retrofitted existing light and sign fixtures featuring traditional, fluorescent, and LED technology.

Find out more about this project and others by contacting SignBoss today!